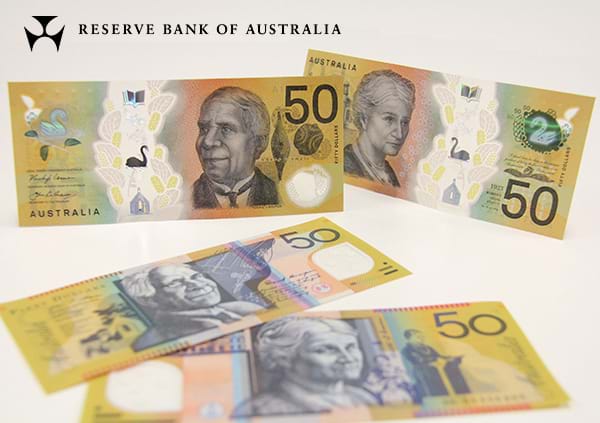 The new $50 banknote enters general circulation tomorrow (18 October 2018), marking a milestone in the upgrade of Australia’s banknotes. The $50 is the most widely circulated banknote, accounting for nearly half of the total value of banknotes in use, and it is the denomination primarily used in ATMs.

Governor Philip Lowe said ‘We were keen for the new $5 and $10 to be well accepted before we launched the most popular note, the $50. This has involved working closely with businesses to assist cash handlers and cash-handling machines to identify and use the notes, which will help minimise disruption to people and businesses.’

The new $50 retains the basic design elements from the previous series. It features portraits of Aboriginal writer and inventor, David Unaipon, and Australia's first female member of parliament, Edith Cowan. They were both campaigners for social change and their work is recognised in several design elements on the banknote. The microprint includes excerpts of Unaipon's book,Legendary Tales of the Australian Aborigines, and Cowan's first speech to the Western Australian Parliament.

The new banknote also has the same security features as the $5 and $10 to deter counterfeiting. It has a top-to-bottom clear window that contains a number of dynamic features including a reversing number and flying bird, as well as microprint and a patch with a rolling colour effect.

It also has a ‘tactile’ feature to help the vision-impaired community distinguish between different denominations of banknotes. On the $50 banknote, this is four raised bumps on each of the long edges of the banknote.

As with any new banknote release, it will take time for the new banknotes to be widely available. While the existing series of banknotes will be progressively withdrawn from circulation, they will retain their legal tender status and can continue to be used.

Full details of the design and security features on the new $50 banknote, and other denominations, are available on the Bank's website at banknotes.rba.gov.au.